Click on photos to enlarge.
Wooden Flutes By "JT Thompson", JT is Navajo
Each flute has an adjustable Air channel Stop.
Slide this stop forward or backward until all notes are clear and uniform.
All FLutes with Certificate and tips for playing sheet. 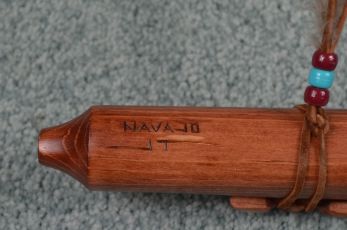 All flutes are signed by the artist Jonah Thompson

It was told to me years ago by a Native Elder, "Everything in the Native Way of Life happens for a reason. Our paths cross with others, gifts are exchanged. The gift may come in the form of a material object, or it can come in the form of a lesson or traditional teaching. This is how traditional native culture is kept alive".
The following story is a perfect example of this:
I was in Oklahoma City setting up for a Native Art Show, when I noticed a local Native Man passing by. He carried with him three Traditional River Cane Flutes. He looked closely at me as he passed by, and I couldn't help but feel the curiosity in his eyes. It was almost as if he was looking through me. I wondered for a moment if I might have known him from somewhere, but I couldn't place him.
Within an hour, He had passed by three more times. Each time with the same look of curiosity. I was relieved when he finally stopped to talk. It was obvious that something was definitely on his mind.
His name was Charles Frazier, a Traditional Choctaw Flute Builder from Oklahoma. He asked if I liked Cane Flutes, and wondered if I would trade a couple of my artifacts for a couple of his flutes. I gladly accepted his offer. It was a good trade. We talked awhile, exchanged phone numbers, and he then left for home.
Later that evening I received a call from my new friend, Charles. He spoke of our meeting as well as our trade. Charles then asked if I had noticed his stares as he passed several times earlier that day. I told him that it was something that I wondered about, and that I thought I may have known him in the past, but didn't remember. I asked him to explain if he would, and his following words left me in awe:
"Sorry about staring so much at you, today. It's not the Indian way to do so, but a strange feeling came over me when I saw your face. I knew you. But I couldn't remember when or from where, but I knew there was something important about our paths crossing, and it didn't hit me until my last pass just before I approached you, today". He explained.
"That's when it came back to me. And don't feel bad if you don't remember me. It was about fifteen years ago at a Sweat Lodge Ceremony when I first saw your face. It was during that ceremony when I had a vision of a man whom I had never met. All I saw was his face. But it was clear. After the ceremony, I asked the medicine Man about my vision. I told him what I saw and asked him to explain it to me. He told me that one day I would cross paths with this man in my vision, and that I would know him, and know what I was to do". He said.
I asked Charles what his vision had to do with me, although deep down inside I felt I somehow knew, but I wasn't quite prepared for his answer.
"You see, Jake, The face of the man in my vision was yours. When I realized this, I flashed back to the words the Medicine Man shared with me about knowing what I was to do. I then looked down at the flutes in my hand and a big smile crossed my face. I was to pass down to you, a gift that was long ago passed down through my ancestors, to me. I was to teach you to become a Traditional Native River Cane Flute Builder. So let's get together and begin your teaching. What are you doing tomorrow" ? He asked.
I was in awe. My voice was frozen. But somehow I found the words. "Tomorrow would be great" I answered. That was the day i built my first River Cane Flute.
I have built thousands of flutes since then, but not a single piece of Cane passes through my hands without a thought of Charles Frazier, and that wonderful gift he was bound to share with me. It is an honor for me to carry on this tradition. Aho!
Jake Stone "Onefeather" (Wiyaka Wanji)